The stretch of economic good fortune the U.S. has experienced for much of 2019 has shown some signs of cooling off in recent weeks. Numbers from the latest edition of the Employment Situation Summary compiled by the Bureau of Labor Statistics appear to represent more evidence of this growth reduction: American nonfarm payroll organizations added 75,000 jobs in May, making it the first and only month in 2019 since February to fall short of six-figure growth.

Economists expected much better of the latest numbers: Bloomberg’s survey of market experts had called for an increase of 175,000 jobs, while a similar poll conducted by Reuters projected the U.S. labor force to add 185,000 new workers to its ranks. By comparison to the previous month, May is even more of a surprising decline in job growth, as April saw 227,000 new employees added to American payrolls (downwardly revised from an initial figure of 263,000).

The unemployment rate, meanwhile, held fast at 3.6 percent – which, as Bloomberg noted, is the lowest number seen for this metric in 49 years.

Industries that saw significant job growth in May should be no surprise to anyone who has followed the BLS’s reports during the last two years: Professional and business services added 33,000 jobs during the month, while healthcare organizations saw their total employment edge up by a margin of 16,000.

Construction was the only other sector of the U.S. economy to add jobs at a level that the BLS considered high enough to deem statistically significant, with businesses in this field bringing on 4,000 new workers during May.

No other industries added or lost any noteworthy number of jobs. However, digging a bit further into the various charts that display the raw employment data in a number of different contexts, yields a few other notable facts: Manufacturing was just behind its fellow blue-collar sector (construction) with a tepid addition of 3,000 jobs. Also, government agencies saw their ranks decrease by 15,000 across the U.S.

Michael Feroli, the chief U.S. economist for JPMorgan Chase & Co., offered a fairly dim assessment of the latest BLS data in an interview with Bloomberg.

“It definitely looks like we’ve downshifted in the pace of job growth,” Feroli told the business news provider. “Overall it’s a disheartening report particularly since you may have some trade effects there, but a lot of the trade tensions escalated [since mid-May].”

The BLS almost always uses data collected at the halfway point of each month as the backbone of its assessments, and May was no different. Trade disputes between the U.S. and several nations, most notably China and Mexico, heated up at breakneck speed in the final weeks of May, so it’s possible that we won’t see numbers indicating the extent of these events’ impact on job growth until the BLS’s June report comes out.

Year-over-year wage gains slowed down slightly to 3.1 percent in May, underperforming April and March (both of which saw 3.2 percent year-on-year upticks). Also, the payroll diffusion index, a metric in the BLS report that isn’t always cited by the media but has considerable significance due to its measure of hiring’s breadth across multiple private-sector industries, fell to 54.8 percent in May from April’s figure of 59.9 percent. Payroll diffusion as of May 2019 is well below its 67.1 figure from a year ago, which some economists view as evidence of adverse impact from the White House’s tariffs and trade disputes on American businesses.

Both Bloomberg and Reuters reported that business leaders across the private sector might consider the latest jobs numbers – as well as the impact from 25 percent tariffs on numerous Chinese goods, and the possibility of escalating import duties on Mexico in the weeks to come – reason enough to call for interest-rate cuts by the Federal Reserve. Whether the Fed agrees with them or not likely won’t be seen until early in 2019’s third quarter. 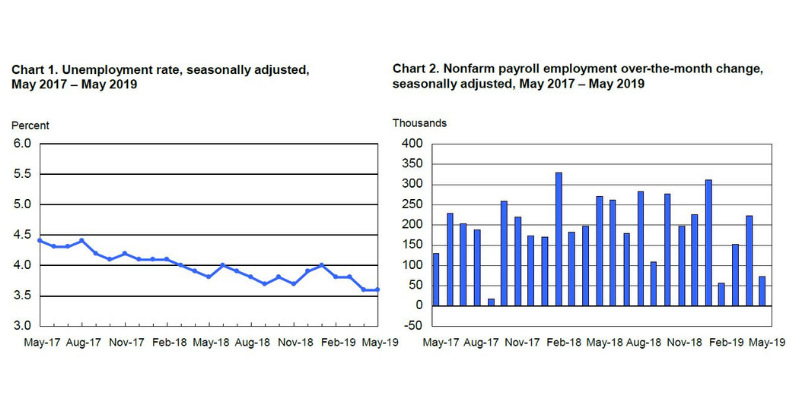